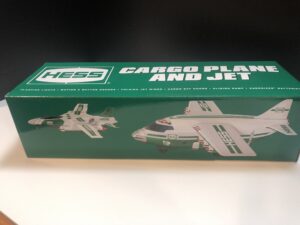 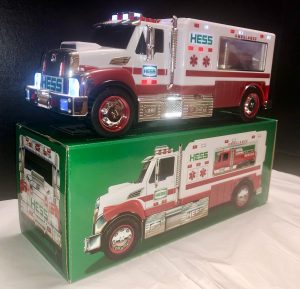 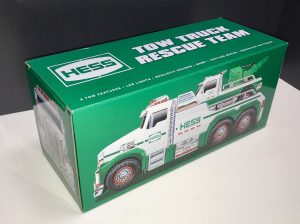 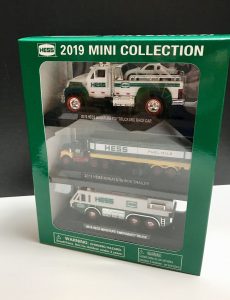 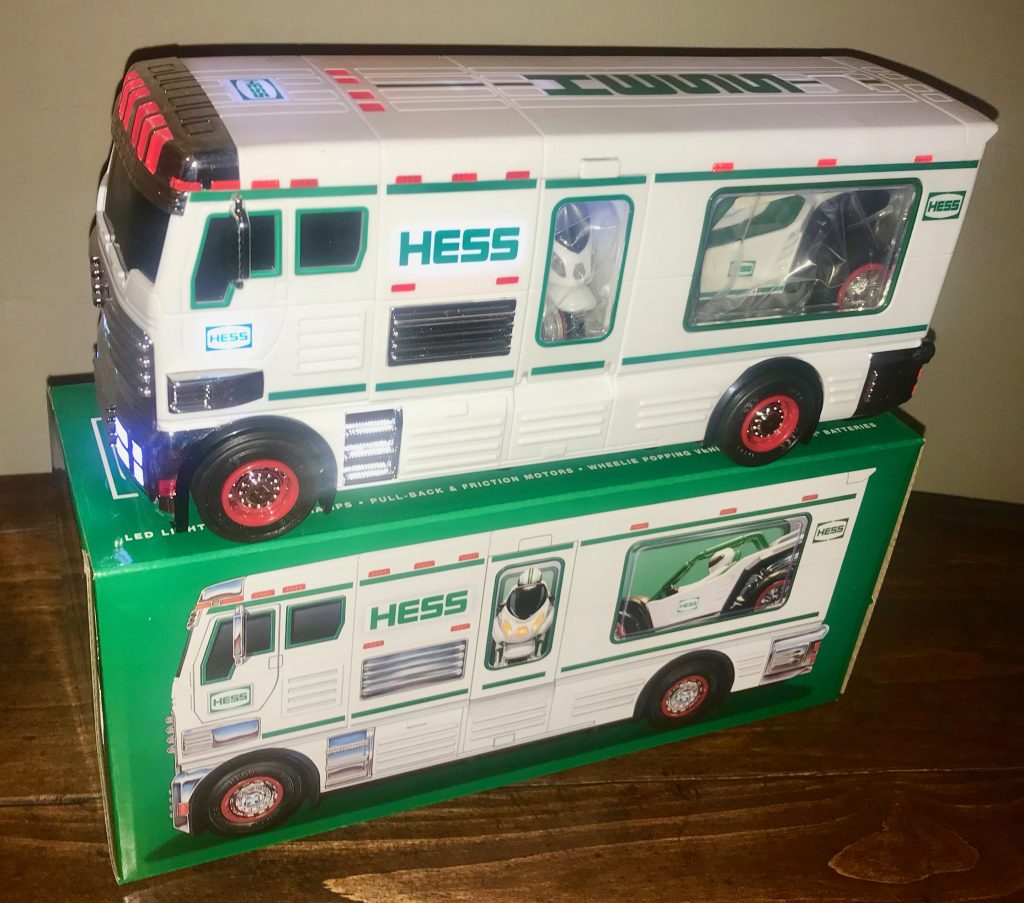 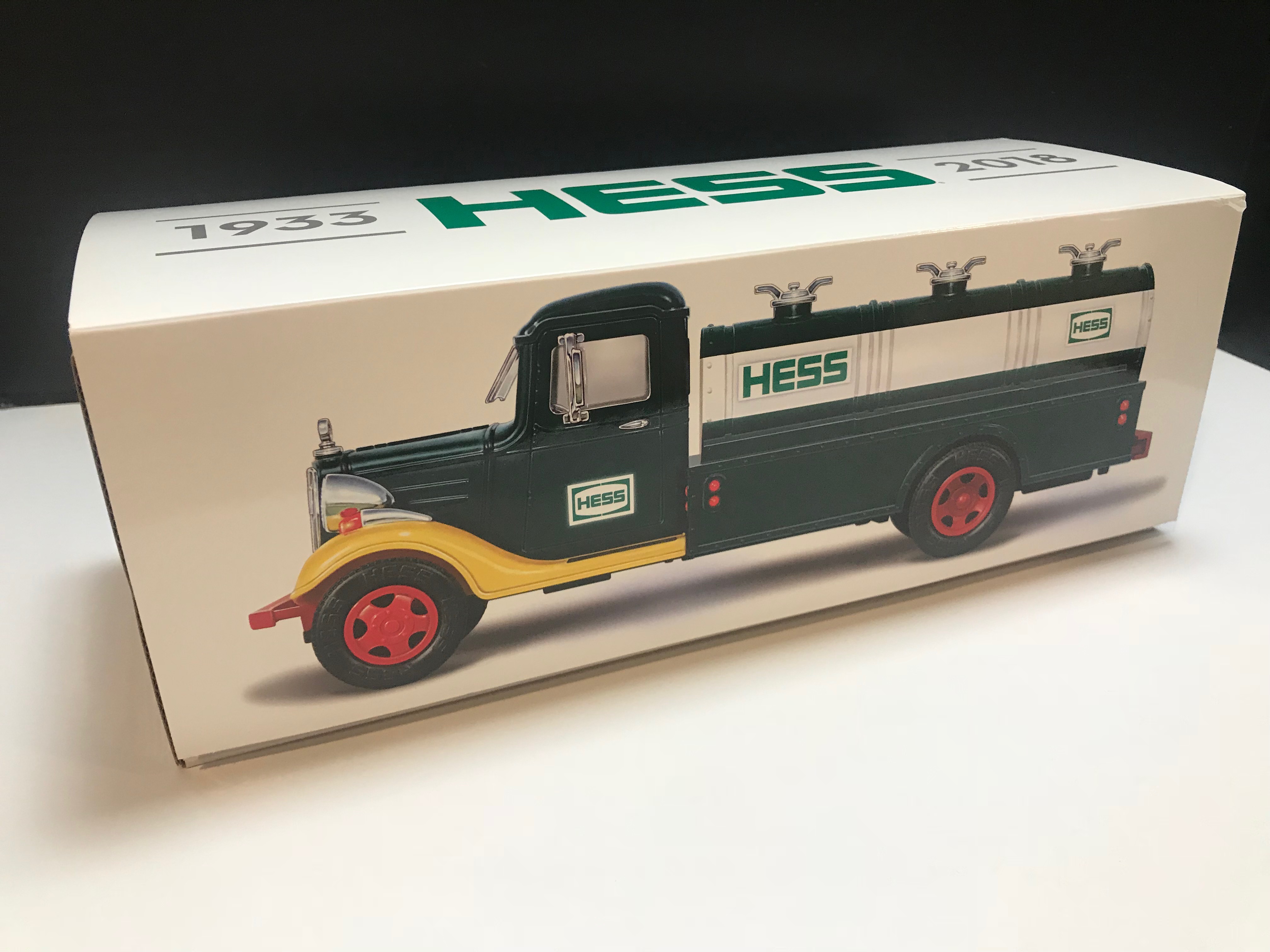 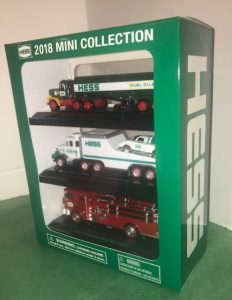 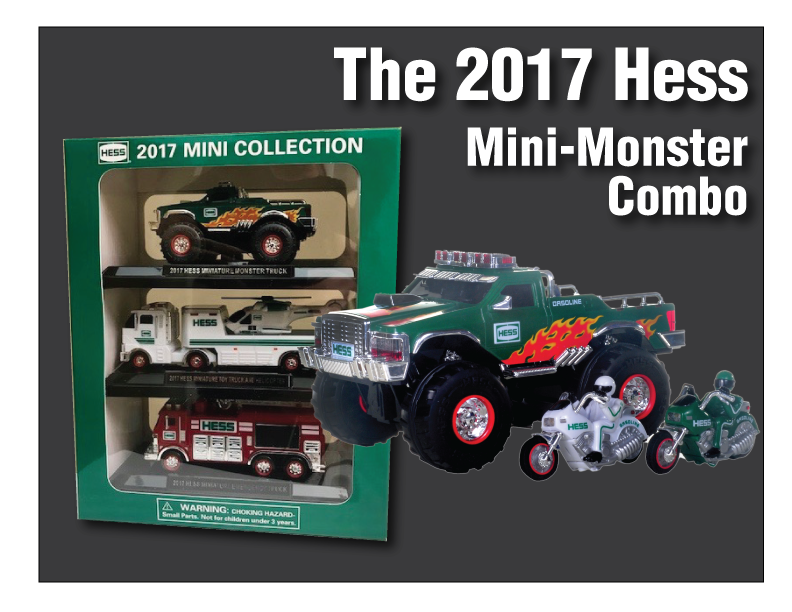 The NEW 2017 Hess Mini Collection arrived on the 10 year anniversary of the Hess Monster Truck (2007-2017).  In fact, inside this collection is a new Hess Mini version of the 2007 truck! A fitting tribute to this popular full-size Hess Truck.  So, we’ve paired this mini version of the Hess Monster Truck with the original full-size truck to bring you this unique Hess Mini-Monster Combo.

Save on both of these Hess collectibles with this Hess Mini-Monster Combo!    All trucks are BRAND NEW in factory fresh cartons. 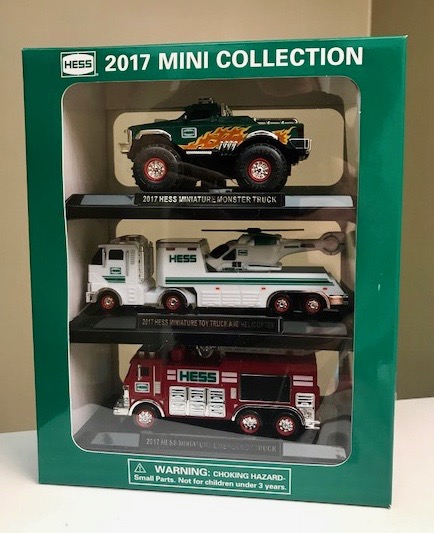 Hess will release another 3 pack of Hess Mini Trucks June 1, 2018.  Pictured above is the 2017  Hess Mini Truck set.  Each of the 2017 Hess Mini Trucks are miniature versions of full sized Hess Trucks that were introduced over a decade ago in 2005, 2006, and 2007.  The Hess 2017 Mini set includes a Hess Mini Emergency Truck, a Hess Mini Truck & Helicopter, and a Hess Mini Monster Truck. Hess sold out of this item in 14 days.  Only a few in stock.  To fill in your collection from prior years, visit our Hess Mini Toy Store by clicking HERE. 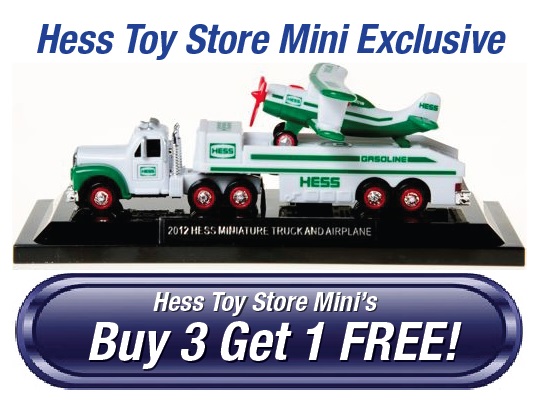 We are excited to see the new Hess Mini Trio that Hess Corporation is releasing this Summer.  Sign up for our customer alerts and we will let you know once they are released and available from Hess! 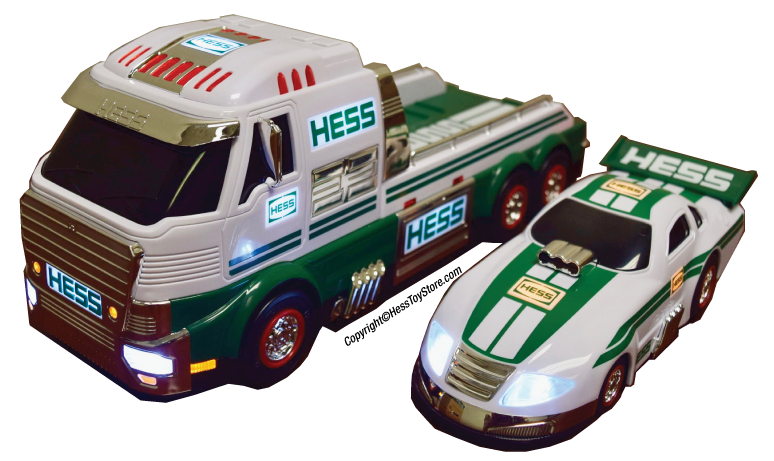 We are thrilled to offer the new 2016 Hess Toy Truck and Dragster. For a limited time you can buy directly from Hess Corporation.  We are currently offering special gift packages like the one at this link. 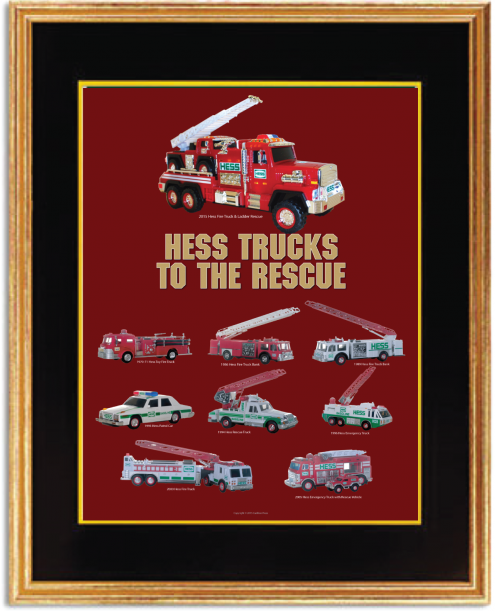 The Hess Truck Emergency & Rescue Theme debuted in 1970 with the very first Hess Toy Fire Truck.  There have been a total of 8 fire or emergency trucks through the years with The New 2015 Hess Truck & Ladder Rescue as the 9th in the series.  To learn more CLICK HERE..

Click Here For Details on Hess Truck Surprise Inside Combos 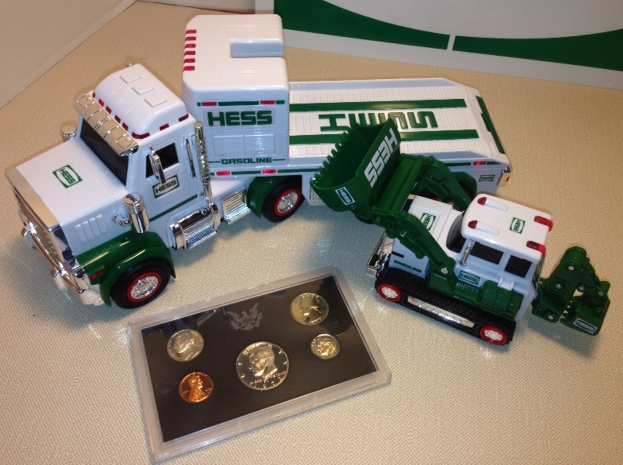 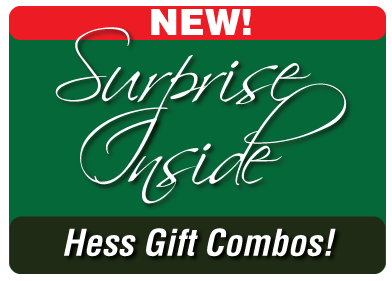 Our biggest, brawniest, “Big 4” Hess Heavy Duty Trucks! Now in one exciting collection for $179.95 and comes with bonus items! 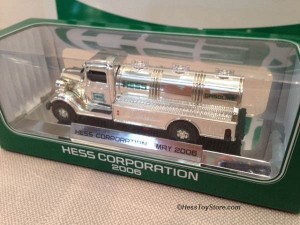 Click HERE for details. Limited edition not sold to the public. Only  TWO in stock.  Buy now before the holiday rush.

For a limited time save on the Hess Monster Truck with Two Motorcycles! Hess Green Gift Wrapping available.

Yes! These are brand new toys in their original Hess Toy Truck Collectible Carton.  When you order vintage Hess Trucks or refurbished toys we will indicate if the truck is used.  Otherwise, All Hess Toy Trucks are new in box with all inserts and cards issued by the manufacturer.

The NEW Hess Truck & Loader Is On The Road!

HESS TRUCKS: Since Hess SOLD OUT of the 2017 Hess Dump Truck & Loader we have only a limited number remaining.  CLICK HERE TO ORDER. The new 2017 Hess Truck features a heavy duty dump truck and loader, similar to the 2008 Hess Truck & Front End Loader. 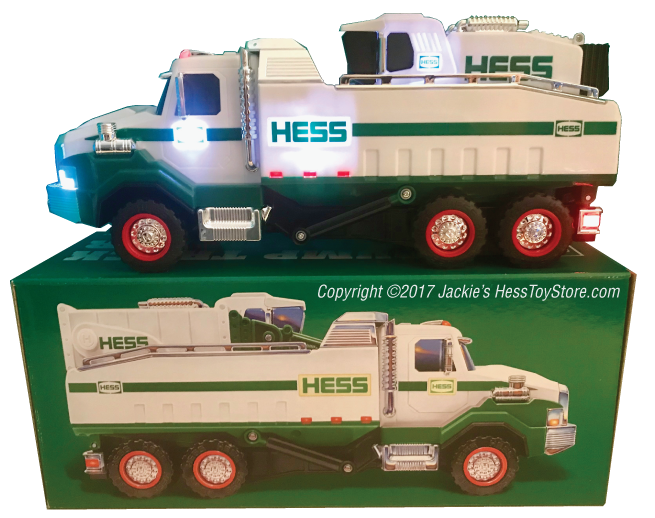 Add A Race Car For Only $5.95 With Any New Hess Truck Purchase! 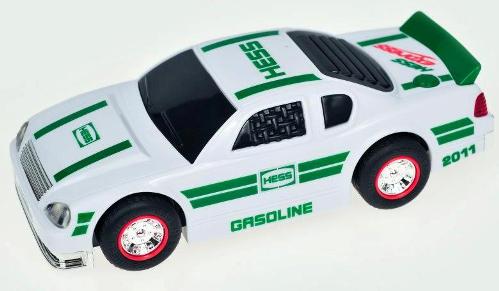 Click Here for details on adding a 2011 Hess Race Car to your order! 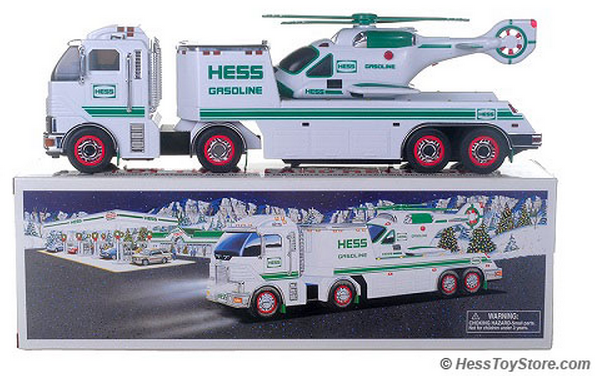 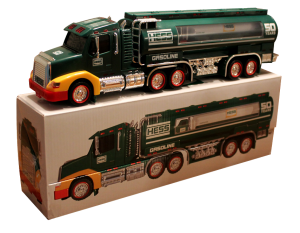 This is an extraordinary collectible with over 100 LED lights. This is a limited edition Hess Truck that is numbered and comes with a certificate of authenticity. For more information go to:  “The Collector’s Edition Hess Toy Truck” 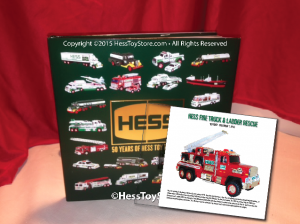 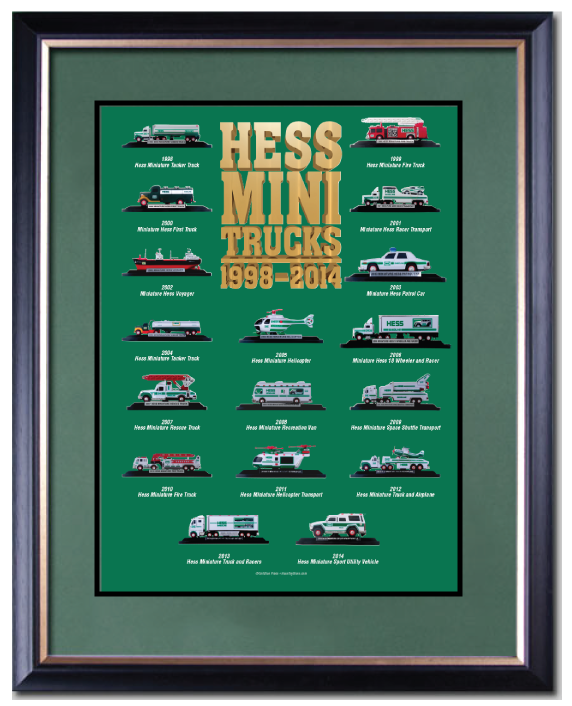 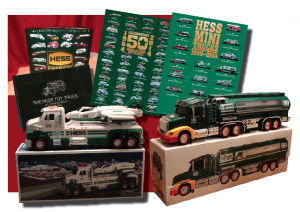 All of our Hess Trucks are brand new and guaranteed to work as promised unless noted otherwise!  Vintage Hess Trucks 25 years or older will provide more detail in the description on the condition for that specific toy. Vintage trucks will show normal signs of wear and boxes will show signs of shelf wear.  We do sell some refurbished Hess Trucks that are posted on the Scratch ‘n Dent page.  Even though all refurbished Hess Trucks posted on this page are listed as used, rest assured that every truck has been tested and inspected and is guaranteed to work as promised! 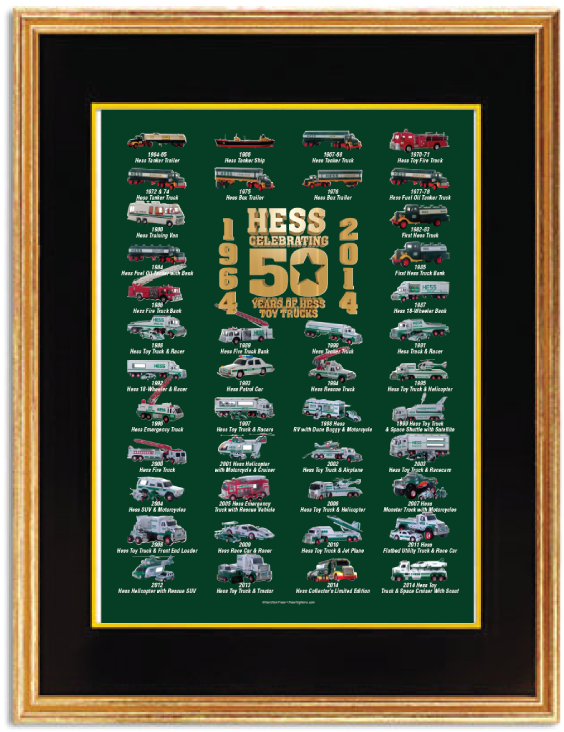 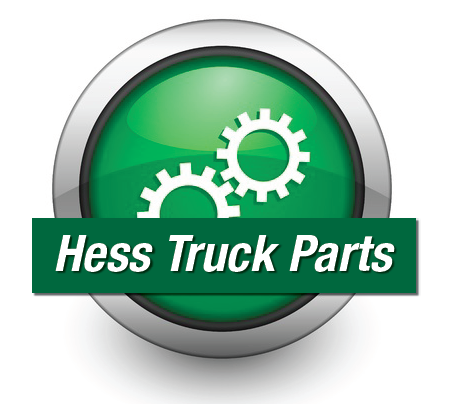 We’re having a Monster Sale on the action-packed Hess Monster Truck with Motorcycles! Don’t miss your chance save on this popular Hess Truck. CLICK HERE to learn more and see the video clip!

Long-time Hess collectors believe that this 2013 Hess Truck edition will be one of the rare hard-to-find trucks for years to come. When they’re gone, they’re gone! Click here to order now. Only $55.95.

The 2000 Hess Fire Truck is Loooonnng on Fun!

Your Hess Truck collection is not complete without this informative guide filled with pictures of every collectible Hess Toy Truck from the very first Hess Truck in 1964 through the 2004 Hess Truck Anniversary edition. This book is out of print and very limited quantities remaining. To order Click Here.

Give Hess Gift Certificates and Let Them Choose!

You can choose from 7 Hess Gift Certificate denominations.  We send your gift certificate direct to the recipient and include a personal note from you on a Hess “Just For You” card. Click Here for details.

Save $10 Now On This Hess Gas Station Truck?

The ultimate Hess Gift idea.  See why they’re cheaper by the ‘doubles.’

NEW! Hess 4 in 1 Blue Cap Hess Hobbyist Tool. Your essential tool to get ‘under the hood’ and  into your Hess Trucks! Click here to add it to your order.

Be sure to check out our complete Hess Trucks collections. Packages priced from $99 and include FREE Shipping. Thank you for shopping Jackie’s Hess Toy Store.

International Shipping is available in select countries.  A flat international rate is set in the shopping cart.  We will notify you if there are any additional charges in shipping to your country. Canadian and EU customers will be responsible for applicable VAT taxes.

Inspected & Tested: All Hess Toys are carefully inspected and tested before shipping to ensure that the toy meets your expectations. Thank you for shopping with us!

Batteries:  Please note that due to FAA, FedEx, and US Postal regulations we no longer ship toys with batteries inside because of risks associated with air cargo fires.  See hazardous materials warning at this link.

Copyright Notice:  All materials contained on this web site are protected by United States copyright law and may not be reproduced, distributed, transmitted, displayed, published or broadcast without the prior written permission of Jackie’s Hess Toy Store or Carillion Inc.  This includes all text and images which are © copyrighted and the property of Jackie’s Hess Toy Store and Carillion Inc.  All rights reserved.  The Hess logo is a registered trademark and is the property of Hess Corporation.