The NEW 2017 Hess Mini Collection arrived on the 10 year anniversary of the Hess Monster Truck (2007-2017).  In fact, inside this collection is a new Hess Mini version of the 2007 truck! A fitting tribute to this popular full-size Hess Truck.  So, we’ve paired this mini version of the Hess Monster Truck with the original full-size truck to bring you this unique Hess Mini-Monster Combo.

Save on both of these Hess collectibles with this Hess Mini-Monster Combo!    All trucks are BRAND NEW in factory fresh cartons.

1. You get the 2017 Hess Mini Collection, which features 3 Hess Minis that pay tribute to 3 of the full size Hess Trucks from a decade ago.  The 3 Hess Minis include:

Each of these toys have the same amazing detail and electronic functions as the earlier Hess Mini Toys.  Each of the toys features multiple lights and the manual functions unique to each toy. All are packaged in an attractive custom toy carton with a large clear front display.

2.  You get the full-size 2007 Hess Monster Truck & Motorcycles.  This has long been a popular Hess Truck featuring exciting flashing lights and sounds.  This set includes 2 Hess Motorcycles with working lights. Carton dimensions are approximately 11″ x 6″ x 6″. 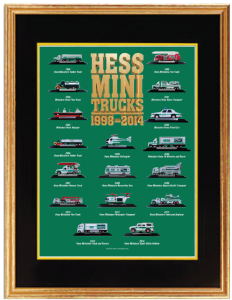 For a limited time, if you order the Hess Mini-Monster Combo before December 1, 2017, we will also include the Hess Mini Gold Edition Poster free of charge!

Click Here to add gift wrapping if you would like to send your Hess Mini-Monster set as a gift.  This also includes a personalized “Just For You” card.  Remember to include your message that will be hand written on your card.

We also offer a Hess Mini-Monster + PLUS Combo that includes a full size fire truck for just $30 more. CLICK HERE for details.