Through the years Hess Corporation has featured helicopters in their Hess Toy Truck Series. Specifically, 1995, 2001, 2006, and 2012 were ‘helicopter’ years in the Hess Series.

In 1998 Hess Corporation introduced the Hess Mini Truck.  The cool thing about this series it that the Hess Mini Toys created each year echo the design of the full-sized Hess Winter Truck a decade earlier.  So the 1995 Hess Truck & Helicopter is captured in miniature a decade later in the 2005 Hess Mini Helicopter.  Similarly, the 2011 Hess Mini pays tribute to the 2001 Hess Helicopter design.

Here’s your chance to lift off with the 6 piece Ultimate Hess Helicopter Collection! Every helicopter in the Hess Series is captured in this unique collection.

Here’s what’s included in your collection: 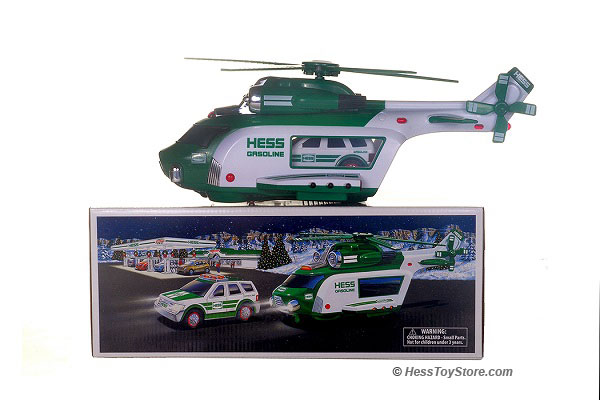